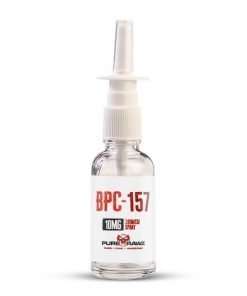 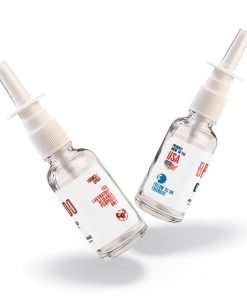 Earn 94 points upon purchasing this product.

BPC-157 is made from a small partial sequence of a compound that is responsible for protection of the body and is derived from human gastric juice. Research shows that BPC-157 heightens the healing factor and ability of many different types of tissue from muscle, tendons, and the nervous system. It also has the potential to increase blood flow back to injured sites, preserve organs, prevent stomach ulcers and cure skin burns. Each BPC-157 spray contains 10mg.

BPC 157 is a synthetic pentadecapeptide – it is composed of 15 amino acids. It is a partial sequence of the body protection compound (BPC) found in human stomach juices and has been investigated for inflammatory bowel disease and soft tissue healing.

The natural peptide plays a crucial role in protecting the lining of the GI tract from damage. Yet another role BPC plays in the stomach is that of a healer. Research has shown that it can prevent and heal stomach ulcers by triggering blood vessel growth (angiogenesis).

Research has found that angiogenesis is essential during tissue repair. It plays a crucial role in wound healing by forming new blood vessels from existing ones. This results in granulation tissue formation, an essential component in the wound healing process. [R][R]

4-Hydroxynonenal (HNE) is a specific molecule found in the body. Over the last three decades, HNE has been shown to be involved in a great number of pathologies, such as metabolic diseases, neurodegenerative diseases, and cancers. [R]

In a study involving male Albino rats, BPC 157 consistently opposed HNE. BPC 157 interfered with the effects of HNE in vitro on the growth of tenocytes cells, both when added before (BPC 157 + HNE) as well as when added later (HNE + BPE 157). [R]

A 1997 study investigated the effect of BPC 157 on elements critical to the process of healing. These elements included granulation tissue and collagen formation, angiogenesis, and tensile strength development. Three experimental rat models were used in the study.

In all experiments, significant differences between BPC 157-treated animals and controls were found, showing a strong, promoting involvement of BPC in the healing process. The final effects were achieved by different routes of application, making BPC 157 a potentially useful therapeutic agent. [R]

A study was conducted to explore the effect of BPC 157 on tendon fibroblast isolated from Achilles tendon of rats. From the results of cDNA microarray analysis, growth hormone receptor (GHR) was revealed as one of the most abundantly up-regulated genes. [R]

BPC 157 dose- and time-dependently increased the expression of GHR in tendon fibroblasts. This may potentiate the proliferation-promoting effect of growth hormone. This, in turn, may contribute to the healing of the tendon. [R]

BPC 157 is a partial sequence of body protection compound that is found and isolated in human stomach juices. It is made up of a chain of 15 amino acids. Studies have shown that BPC 157 has a very safe profile and exhibits a particular wound healing effect. [R]

TB 500, meanwhile, is a synthetic form of Thymosin Beta 4. TB4 is a regenerative compound found in saliva, tears, and cerebrospinal fluid. In vivo and in vitro testing has shown that TB500 could alleviate apoptosis or premature cell death of tubular epithelial cells. [R]

Research on synthetic BPC 157 began in 1991. Since then, multiple animal studies and a few clinical trials have established that this research chemical possesses many of the properties of its parent molecule.

BPC 157 has been shown to be safe in clinical trials for treating inflammatory bowel disease (IBD). It also demonstrated a very safe profile and exhibited a particular wound healing effect. There was a complete absence of adverse side effects in trials. [R]

In rats with irritable bowel syndrome (IBD), this peptide decreased inflammation. This shows the massive potential research implications of the anti-inflammatory effects that BPC 57 can possess. [R]

A recent study set out to investigate the effect of BPC-157 treatment on skin wound healing. An alkali rat-burn model was used for the investigation. Altogether, the results indicated that BPC 157 might accelerate wound healing in an alkali burn-induced skin injury model. [R]

In a review, BPC 157 was found to cure cutaneous and other tissue wounds in rats simultaneously. It did that by increasing various genes expression in rat excision skin wounds. This would define healing in other tissues, such as the GI tract, tendon, and more seen with BPC 157 therapy. [R]

BPC 157 was effective in studies intended to improve the healing of transected Achilles tendon. It was found to fully improve recovery biomechanically, functionally, microscopically, and macroscopically. These findings favor BPC 157 in future Achilles tendon therapy. [R]

In another study, the effect of BPC 157 on early function recovery after Achilles tendon to bone connection was cut or crushed. This synthetic peptide was found to improve functional recovery by anti-inflammatory activity and histological inflammatory cell influx. [R]

A 2003 study published in the journal BURNS investigated BPC 157 in burnt mice. The peptide’s effects on corticosteroid impaired healing of deep partial skin thickness burns were investigated. It was found that BPC 157 consistently improved given burn healing. [R]

Likewise, accelerated healing of excisional skin wounds in rats was observed following BPC 157-treatment. It produced a dose-dependent acceleration of wound healing equivalent at the highest doses to that observed with becaplermin [standard therapy for foot ulcers]. [R]

Similarly, BPC 157 significantly improved the healing of segmental bone defects in rabbits. The possible relevance of this pentadecapeptide could be a basis for methods of choice in the future management of healing impairments in humans, and requires further investigation. [R]

To properly evaluate the achievement of the used BPC 157-therapy, it is important to know that no carrier was used, and thereby, the obtained beneficial effect can be directly attributed to this peptide. However, the precise mechanism of this beneficial impact of BPC 157 remains elusive.

A recent study carried out a review of research on BPC 157 in terms of brain-gut axis. It concluded that the gastric peptide may serve as a remedy in various central nervous system (CNS) disorders.

Besides, in favor of the brain-gut interrelations, alcohol receiving rats treated with BPC 157 had portal pressure at control levels. Their liver and GI disturbances were counteracted. [R]

Non-steroidal anti-inflammatory drugs (NSAIDs) such as aspirin and ibuprofen can result in toxicity by the same pharmacology that makes them so effective therapeutically. [R]

In an NSAID toxicity model, BPC 157 countered diclofenac-induced gastrointestinal, liver and encephalopathy lesions. This may encourage its further use as a therapy to counter diclofenac- and other NSAID-induced toxicity. [R]

Where to Buy BPC 157 Online

Pure Rawz is the best place to buy BPC 157 for sale.

Is BPC 157 a banned substance?

On January 1, 2022, the World Anti-Doping Agency (WADA) added BPC 157 to its Prohibited List. BPC 157 is now prohibited under the S0 Unapproved Substances category of the list.

What are the side effects of BPC 157?

BPC 157 was found to be safe in inflammatory bowel disease trials and in a multiple sclerosis trial. However, more studies are needed to examine its complete safety profile and long-term effects. [R]

Multiple studies on animal test subjects have shown that BPC 157 possesses potent healing characteristics. This synthetic peptide might also counteract the toxicity caused by NSAIDs and may improve gut health, too. Clinical studies in randomized populations are needed to examine its safety profile and long-term effects.

Please note, packaging might differ slightly as we update our packaging and labels. Please research the scientific uses of this product and read our TERMS AND CONDITIONS before completing your purchase.
By completing and paying for your order, you agree to our TERMS AND CONDITIONS.  Customer satisfaction is our number one priority, if you are not 100% satisfied with the product you received, please contact us at support@purerawz.co
We are not affiliated, associated, authorized, endorsed by, or in any way officially connected with SARMScentral.org, or any of its subsidiaries or its affiliates.
ATTENTION: All our products are for LABORATORY AND RESEARCH PURPOSES ONLY not for veterinary or human usage.