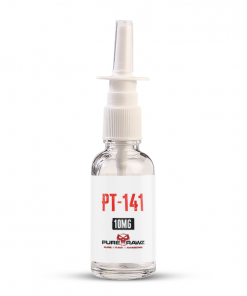 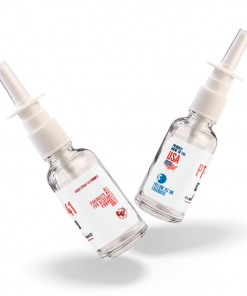 Earn 94 points upon purchasing this product.

PT 141, also known as bremelanotide, is a synthetic derivative of the alpha-melanocyte-stimulating hormone. Results from a clinical trial suggest the potential for PT 141 to positively affect desire and arousal in women with female sexual desire disorder.

PT 141 was also evaluated in healthy male subjects and Viagra-responsive erectile dysfunction (ED) patients. In both studies, an erectile response induced by PT 141 administration was statistically significant, compared to placebo, at doses > 7mg.

Based on its erectogenic potential and tolerability profile, PT-141 is a promising candidate for further evaluation as a treatment for male ED.

PT 141 is a synthetic peptide analog of alpha-MSH. Administration of PT-141 to normal men and patients with erectile dysfunction resulted in a dose-dependent increase in erectile activity. The results suggest that PT-141 holds promise as a potential new treatment for sexual dysfunction. [R]

Furthermore, the Food and Drug Administration (FDA) has already approved PT 141 to treat acquired, generalized hypoactive sexual desire disorder (HSDD) in women. HSDD is characterized by low sexual desire. It is not due to a co-existing medical or psychiatric condition. [R]

Pure Rawz sells PT 141 for laboratory research use only.

Melanocortin receptors are involved in a wide array of physiological functions. These receptors affect sexual function, pigmentation, energy homeostasis, and inflammation. Due to this, the MCR family has attracted considerable research activity. [R]

PT 141 activates MC1R, MC3R, and MC4R in the hypothalamus, affecting the area of the brain involved in sexual arousal. This phenomenon was observed following systemic administration of PT-141 to rats, which resulted in penile erections. [R]

PT 141 and Melanotan-2 are synthetic analogs of alpha-MSH.

PT 141 is a synthetic derivative of Melanotan 2. In clinical trials, it has demonstrated its ability to increase sexual arousal in males and females. The FDA has approved PT 141 to treat sexual dysfunction in women with hypoactive sexual desire disorder (HSDD).

PT 141 was first mentioned in research literature in 2003. Since then, it has attracted many animal studies and clinical trials for its potential ability to treat sexual dysfunction in men and women. All these studies have shown that PT 141 holds immense potential.

PT 141 and Sexual Desire in Women

This preliminary evaluation suggests the potential for PT 141 to positively affect desire and arousal in women with female sexual desire disorder.

PT 141 and Sexual Desire in Men

PT 141 was evaluation following intranasal administration in healthy male subjects and Viagra-response ED patients. In both studies, an erectile response induced by PT 141 administration was statistically significant, compared to placebo, at doses greater than 7mg. [R]

PT 141 was safely administered and well-tolerated in both studies, with flushing and nausea the most common adverse events reported. No clinically significant changes in vital signs, laboratory tests, ECGs or physical exams were observed.

Based upon its erectogenic potential and tolerability profile, PT-141 is a promising candidate for further evaluation as a treatment for male ED.

Administration of PT-141 to patients with ED resulted in a dose-dependent increase in erectile activity. This drug resulted in erections occurring in 17 out of 20 men with ED. These results suggest that PT-141 holds promise as a new treatment for sexual dysfunction. [R] [R]

Co-administration of PT-141 and sildenafil was safe and well-tolerated.

According to the FDA, the most common side effects of PT 141 are nausea and vomiting, injection site reactions, flushing, and headache. About 40% of patients in the clinical trials experienced nausea. [R]

What is the molecular formula of PT 141?

In studies involving healthy patients and men with ED, PT-141 was safely administered and well-tolerated. No clinically significant changes in vital signs, lab tests, ECGs, or physical exams were observed.

Pure Rawz sells PT 141 for research purposes and not for human consumption.

Pure Rawz is the best place to buy PT 141 for sale.

PT 141 appears to work by activating receptors in the central nervous system. It has shown immense potential as a potential treatment for ED in men. This drug has also helped treat female sexual dysfunction in women with HSDD clinical trials.