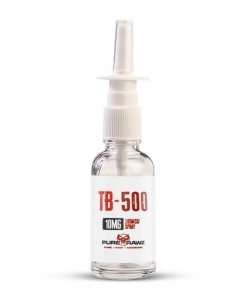 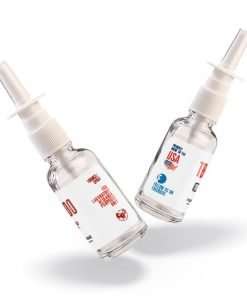 Earn 168 points upon purchasing this product.

TB-500 is a synthetic replica of Thymosin Beta 4, a protein peptide that occurs naturally in the bodies of both animals and humans. In horse racing, TB 500 is shown to have a significant effect on the reduction of inflammation and the inhibition of adhesions from injury.

In a rat full-thickness wound model, TB-500 exhibited potent wound-healing effects. Wounds treated topically with TB-500 showed an 18% decrease in gap compared with saline-treated control wounds as early as 4 days after injury. They also contracted at least 7% more than controls by day 7. [R]

TB-500, like Thymosin Beta 4, consists of 43 amino acids. This synthetic peptide was originally developed for veterinary purposes and is claimed to offer various therapeutic benefits to a racehorse. Such claims led to the development of a testing procedure to detect the use of this drug in equines. [R]

PureRawz sells TB 500 for laboratory research use only.

TB 500 up-regulates the action of actin and blocks actin polymerization in eukaryotic cells.

Actin is a cell-building protein that promotes cell migration and proliferation. It plays a pivotal role in muscle contraction as well as in cell differentiation and helps with tissue repair and regeneration. [R]

TB-500 has also been shown to promote angiogenesis or blood vessels formation, likely through the Notch signaling pathway. In a rat study, the TB-4 treated group showed increased expression of genes associated with angiogenesis than the control group. [R]

TB-500, as stated above, is a synthetic form of TB4, a regenerative compound found in the majority of tissues and circulating cells in the body. In vivo and in vitro testing has shown that TB4 could alleviate premature cell death or apoptosis of tubular endothelial cells. [R]

BPC 157, meanwhile, is a partial sequence of the body protection compound found in human gastric juices. It has been shown to be safe in clinical trials for treating inflammatory bowel disease (IBD). Additionally, a 2003 study found that BPC 157 improved burn healing in mice. [R] [R]

Keep in mind that much of the research has been conducted on TB4, the parent molecule and naturally occurring version of synthetic TB500. However, since TB500 is chemically and structurally identical to TB4, they should offer the same effects on research subjects.

In a clinical phase 2 trial, TB4 was found to reduce the volume of scars after a heart attack. The trial was conducted on patients with acute myocardial infarction (MI), the leading cause of cardiac death worldwide. It was confirmed that TB4 could protect and repair the heart. [R]

Lastly, a study has highlighted multiple functions TB4 plays in the protection, repair, and regeneration of the mammalian heart. It has been shown to promote cell survival, modulate the ischemic heart’s inflammatory environment, and reactivate the dormant epicardium. [R]

In a mouse model of Duchenne muscular dystrophy (DMD), effects of chronic TB4 administration on skeletal and cardiac muscle were studied. DMD is characterized by weakness and wasting of the pelvic area muscles. As the disease spreads, the trunk and forearms are affected.

TB4 treated mice showed a significant increase in skeletal muscle regenerating fibres compared to untreated mice. Based on these results, chronic TB4 administration could have a potential role in the treatment of skeletal muscle disease in Duchenne muscular dystrophy. [R]

Thymosin Beta 4 was acutely increased in the plasma of exercising humans irrespective of the insulin resistance condition or exercise mode, notes a study published in the November 2021 edition of the American Journal of Physiology. [R]

Treatment of mice with TB4 didn’t ameliorate the metabolic disruptions associated with diet-induced obesity. Nor did it enhance muscle regeneration. However, TB4 increased osteoblast proliferation and neurite outgrowth, consistent with its WADA classification as a prohibited growth factor.

A study published in 2017 discussed the logical and clinical justifications for Thymosin Beta 4 as a potential target for rheumatoid arthritis (RA) therapeutics. It was shown that there were increased TB4 levels in serum and joint fluid in patients with RA.

In conclusion, whether increased TB4 expression in serum and joint fluid in RA patients is beneficial or harmful remains to be elucidated. [R]

According to scientific papers presented at the 7th International Congress of Allergy and Immunology, TB4 markedly accelerated wound healing in the eye. It does that by increasing epithelial migration and reducing inflammation. Both are important to more rapid and complete healing. [R]

Another study was conducted to investigate the efficacy and safety of TB4 treatment for peripheral neuropathy, which is a chronic complication of diabetes mellitus. The data demonstrated that TB4 treatment ameliorates diabetic-induced axonal degeneration and demyelination.

This may likely contribute to the therapeutic effect of TB4 on diabetic neuropathy.

However, all these changes in mice and rats were significantly attenuated by exogenous TB4 treatment. Taken together, findings in this study suggested that exogenous TB4 might prevent CCI-4 acute liver injury and subsequent fibrosis. [R]

No. TB 500 is a protein peptide made up of a chain of 43 amino acids. An amino acid is the smallest building block of peptides and, by extension, proteins.

None of the studies conducted on TB 500 point to any role played by this synthetic peptide in the reproduction of new blood cells.

PureRawz is the best place to buy TB500 online.

In order to be the best research peptides supplier, we provide reference materials with every product we sell. Each of our products comes with an independent, third-party-issued Certificate of Analysis for identification, purity, and concentration.

Multiple animal studies have demonstrated that TB4 offers potential therapeutic benefits for multiple conditions. However, with human trials lacking on this synthetic peptide, the FDA hasn’t approved it for human consumption.

Please note, packaging might differ slightly as we update our packaging and labels. Please research the scientific uses of this product and read our TERMS AND CONDITIONS before completing your purchase.
By completing and paying for your order, you agree to our TERMS AND CONDITIONS.  Customer satisfaction is our number one priority, if you are not 100% satisfied with the product you received, please contact us at support@purerawz.co
ATTENTION: All our products are for LABORATORY AND RESEARCH PURPOSES ONLY not for veterinary or human usage.