Earn 28 - 70 points upon purchasing this product.

Amino tadalafil belongs to a class of compounds called PDE5 inhibitors, which many other erectile dysfunction compounds such as Mirodenafil, and Vardenafil also belong to.

In a 2017 study, researchers discovered that it could improve lean mass and muscle function among non-obese male subjects. This suggests the potential of further research to evaluate tadalafil as an aid for pre dominantly lean subjects and improvement of muscle function.

Tadalafil (Generic Cialis) is a medicine approved by the FDA to treat erectile dysfunction (ED). It is also used to treat enlarged prostate (benign prostatic hyperplasia). This medicine is FDA-approved for the treatment of pulmonary arterial hypertension (PAH). [R][R]

As stated above, tadalafil belongs to a class of medicines called PDE5 inhibitors. PDE5 inhibitors are a type of compound that blocks the action of PDE5, an enzyme that blocks blood vessels. This enzyme does that by breaking down cGMP, a molecule that causes smooth muscles to relax. [R]

These effects – blocking the action of PDE5 and preventing the breakdown of cGMP – help PDE5 inhibitors manage conditions such as erectile dysfunction (ED). It also enables all the medicines like tadalafil to treat high blood pressure in the lungs (pulmonary hypertension). [R]

Aside from that, research has shown that daily tadalafil had the ability to potentially improve lean mass content in non-obese men, probably via enhanced insulin secretion, estradiol reduction, and improvement of endothelial function in vivo. Tadalafil has also shown therapeutic potential in bronchial asthma. [R][R]

How does Tadalafil Work?

Tadalafil works by preventing the breakdown of cGMP, an enzyme that promotes muscle relaxation and normally functions to get the penis hard. This may result in more blood flow to specific body parts, including the penis, helping tadalafil manage conditions such as ED.

Tadalafil has been on the market since 2003 to treat ED. It has also been FDA-approved to treat benign prostatic hyperplasia (BPH), a condition caused by an enlarged prostate. Tadalafil may have the potential to aid in making BPH symptoms less severe, reducing the need for prostate surgery.

Tadalafil is could also be used as a potential treatment for pulmonary arterial hypertension (PAH). It is a type of high blood pressure in which blood vessels in the lungs are narrowed, blocked, or destroyed. A progressive increase in the symptoms of this disease can lead to right ventricular heart failure and eventually death. [R]

Research estimates that it may usually take tadalafil 30 to 60 minutes to work for ED. This would make it less speedy than avanafil, another approved ED treatment. Avanafil starts providing relief from ED symptoms in as little as 15 minutes. But 60 minutes is a standard time most PDE5 inhibitors take to get to work. [R]

Tadalafil is a generic version of Cialis. Both are the same in terms of working mechanism, effectiveness, and side effects. They also have the same active ingredient (Tadalafil). Like Tadalafil, you can buy Cialis online with a prescription.

The only difference between tadalafil and Cialis is in the cost. Generic Tadalafil usually costs three to four times lower than branded Cialis. That is due to one simple reason: while Cialis is produced by one manufacturer (Eli Lilly), Tadalafil is made by many.

The competition between different Tadalafil manufacturers forces them to keep the price of this medicine down to stay competitive in the market. However, since it is the only one licensed to sell Cialis, Eli Lilly hasn’t been caught up in these price wars.

Tadalafil and Sildenafil belong to the class of medicines called PDE5 inhibitors. Both have the exact working mechanism – prevent the breakdown of cGMP by blocking the action of the PDE5 enzyme. Both prescription medications are FDA-approved to treat ED and PAH.

Here are the differences between Tadalafil and Sildenafil:

Talk to your healthcare professional to know more.

Like Tadalafil and Sildenafil, Vardenafil is also a PDE5 inhibitor. That means it has a similar working mechanism to the two compounds. Vardenafil has also been FDA-approved to treat ED and PAH. However, a few differences do exist between Vardenafil and Tadalafil.

Let’s discuss them in this section:

Multiple clinical trials have shown that Tadalafil is effective in easing the symptoms of ED. This prescription medication has also been shown to be effective against benign prostatic hypertrophy and pulmonary arterial hypertension. Tadalafil has also shown promise in building lean muscle mass.

The review noted that several recent studies have shown a significant treatment benefit from once-daily, low-dose Tadalafil. These studies have led to the most recent development in the treatment of ED, once-daily Tadalafil for ED, which was FDA-approved in 2008. [R]

Benign prostatic hyperplasia (BPH) is a non-cancerous condition in which the prostate gland is enlarged. Men who are at a higher risk of BPH include: those over the age of 50; those whose fathers had BPH; obese and overweight men; men who don’t stay active; and some men with ED. [R]

As stated earlier, Tadalafil has been an FDA-approved treatment for BPH. Tadalafil may make the symptoms associated with BPH – difficulty urinating, a decreased flow of urination, hesitation at the beginning of urination, and a need to get up at night to urinate – less severe.

Tadalafil may also reduces the chance that prostate surgery will be needed. [R]

Pulmonary arterial hypertension or PAH involves the narrowing, blockage, or destruction of blood vessels in the lungs. It can be deadly. An estimated 50 – 100 people per million have this condition. At the time of writing, there is no cure for PAH. [R]

A recent study set out to investigate the potential effects of daily Tadalafil administration on body composition. It found that daily Tadalafil improved lean mass content in non-obese men potentially due to enhanced insulin secretion, estradiol reduction and improvement of endothelial function in vivo. [R]

In a double-blind, randomized, cross-over design, twelve healthy subjects were supplemented with 20 mg of Tadalafil or a placebo. The study found Tadalafil increased lipolysis (fat loss) as evidenced by a significant increase in circulating FFA and glycerol. [R]

ED and depression are closely related. A study was sought to determine whether ED and depression were improved by Tadalafil. It was found that daily Tadalafil 5mg could be helpful for ED patients and improved lower urinary tract symptoms (LUTS) and quality of life. [R]

How long does Tadalafil take to work?

Research has shown that Tadalafil usually takes 30 to 60 minutes for ED. [R]

How long does Tadalafil last?

Tadalafil may potentially ease ED symptoms for as many as 36 hours per dose.

What are the side effects of Tadalafil?

Headaches, indigestion, nausea, diarrhea, and flushing are the common side effects of Tadalafil.

Does Tadalafil have any interactions?

Does Tadalafil cause low blood pressure?

Where to Buy Amino Tadalafil Online 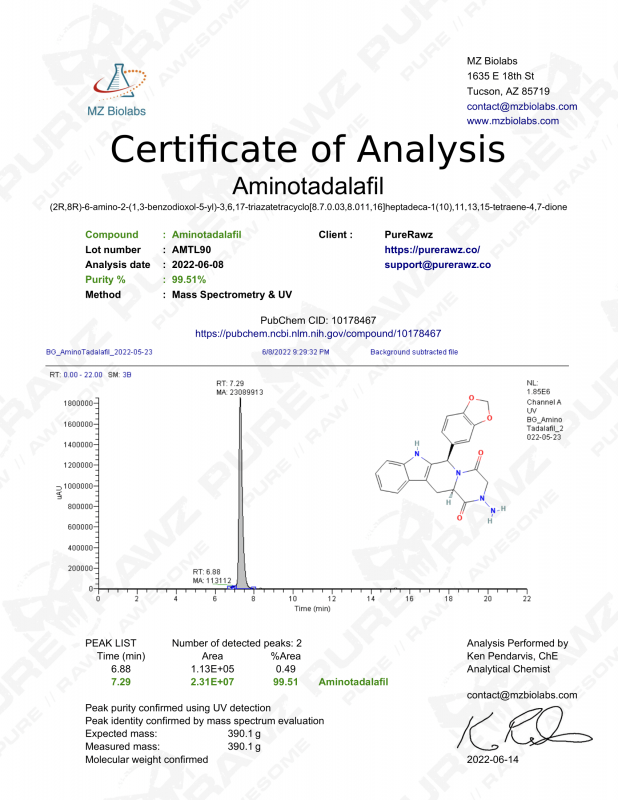